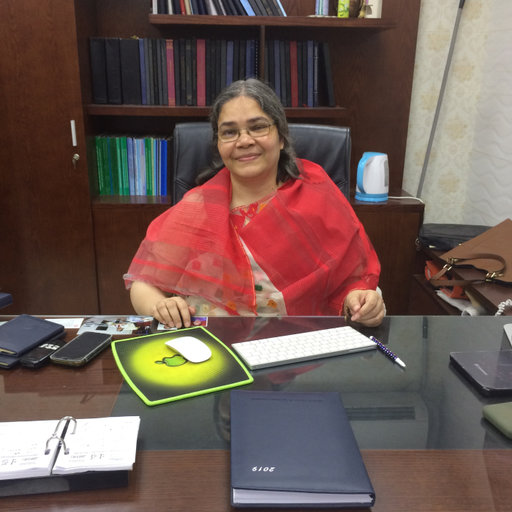 Dr Hoque received her PhD in Physics from Bangladesh University of Engineering and Technology (BUET). During her PhD studies she visited the Department of Materials Science and Engineering (Solid State Physics) at Uppsala University on ISP support for five months to accomplish part of her PhD work.

After her PhD studies she continued to postdoc positions at the Indian Institute of Science, Bengaluru, India and at Yale University, USA.

Today she works as Chief Scientific Officer and Head of the Materials Science Division at the Atomic Energy Centre Dhaka (AECD) in Bangladesh. She is also the group leader of an ISP-funded research group (BAN-02/2).

- The beauty of nature that physics is able to unfold, has always attracted me to this subject. My job placement at Atomic Energy Centre Dhaka, Bangladesh Atomic Energy Commission, helped me further to dedicate myself to the subject I love most.

The Materials Science Division at AECD works with nano and advanced materials and the variety of their structural, magnetic, thermal, optical, mechanical and transport properties and applications such as magnetocaloric, magnetoresistance, ultrasoft and ultrahard magnetism, giant magnetoimpedance, giant magnetoresistance of nanoferrites, nanoperovskites, nanohydroxyapatites, carbon nanotubes etc. Following the recommendation of ISP and the revolutionary strides in biotechnology through the applications of nanomaterials, Dr Hoque focused/oriented her research in the field of nanobiotechnology.

The overall goal for her group is to cope up with the contemporary international research in the above-mentioned fields and to develop novel materials to address the burning issues of nanobiotechnology in the main. Due to the dynamic and intensive research within materials science in general and in nanomaterials in particular internationally, Dr. Hoque puts her overwhelming efforts to consolidate her group consisting of large number of students, her fellow colleagues, and national/international collaborators.

At the national level, Dr Hoque´s group is actively playing a role as precursor to develop countrywide materials science laboratories. New materials science departments are brewing in the universities where former students of MSD, AECD played role as key/resource personnel. Many of her students are holding key faculty positions in the public universities and performing outstanding research abroad.

She looks forward to extend and consolidate her research in nano and nanobiotechnology to meet the demand of Bangladesh. She and her group already established nanomaterials synthesis and characterization laboratories equipped with the most modern facilities to develop MRI contrast dye and hyperthermia mediators. Her future goal is to elevate further for clinical trial. Further, Dr. Hoque along with her group would like to undertake further research in targeted drug delivery, magnetofection and bio-labeling using nanoferrites.

- When I was introduced to ISP after joining the research programme in the Materials Science Division, AECD, I was really very amazed to find that through this organization the Swedish nation feels its obligation to provide support to develop science in countries other than Sweden where facilities of scientific research fall back. Since then, I myself took it as a mission to provide my maximum effort to fulfill the aim and objective of ISP, which is to develop research within my platform and beyond. I was fully identified the goal of ISP in my country and the effect is tangible within two decades of persuasion in the materials science, physics, and applied chemistry research. If I had not come across ISP I would have never imagined that such an altruistic organization exists, the goal of which is to develop scientists and research in country to country.

Besides the grant, we constantly get moral support from ISP to persevere in the challenges of research. ISP, moreover, has introduced BAN-02 scientists to the professors of seminal thoughts whose morals and ideals are gems of development of BAN-02.

Dr Hoque has supervised many post-graduate students including PhDs and believes that the students are the backbone of the development of a nation:

- Without students, PhDs, and postdocs a nation cannot fulfill the desired goal to achieve a knowledge-based society. And, without a knowledge-based society there cannot be any development. It may be mentioned that the GDP of Bangladesh in 2019 rose to 8.1%, which was 4.8% in 2001. The academicians of Bangladesh had contribution to develop constructive optimism, which is essential for a nation to develop.