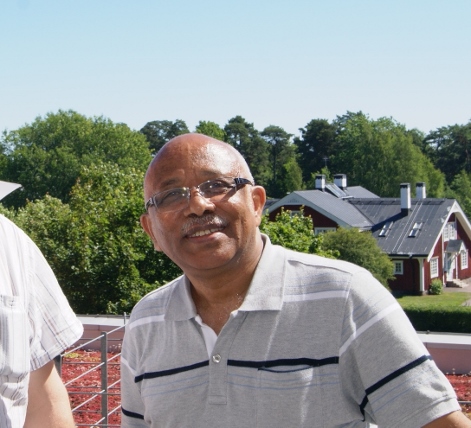 Professor Mammo’s research group is involved in the synthesis and characterization of new and improved conjugated polymers for possible applications in solar cells, fuel cells, and sensors at the Department of Chemistry at AAU. Basically, the group is utilizing techniques of organic chemistry and electrochemistry to prepare new polymers that can be used in the making of cheap and efficient solar cells, which is an attractive and viable method to solve future energy crisis. Polymer solar cells have potential advantages over the more commonly used silicon based solar cells such as, light weight, low cost, and the possibility to fabricate them by roll-to-roll printing on large area plastic substrates.

- Currently only small scale prototype polymer solar cells exist as higher solar energy conversion efficiency has to be achieved in order for such devices to be commercially viable. Some of the materials we have prepared together with our counterparts at Chalmers Technical University in Sweden have registered good power conversion efficiency (PCE) of about 7-8%, but for commercial purposes the PCE should be at least 10%.

The growing demand and interest for cheap and clean energy sources will continue to encourage and fuel further research in this area.  ISP has supported the research group since 2002, but Professor Mammo has been involved with a ISP supported research group at Department of Physics, AAU, since the mid 1990’s.

- The ISP model is quite unique. I take every opportunity I get to talk to others about the model. It is a complete package. You get support in many ways, through which you acquire the strength to do science. Money alone does not get you anywhere, unless it is backed with other things like efficient purchasing and procurement of supplies and instruments, strong instrument maintenance capability, strong technical and administrative support, etc. Besides, scientists in less privileged countries should develop that strong sense of belonging to the world community of scientists. Exchange of researchers (North-South, South-South) and sandwich model of training candidates have been quite beneficial in this regard.

Professor Mammo was one of the first two students to graduate with a PhD degree from Addis Ababa University in 1989. He conducted his PhD studies on a sandwich basis with the University of Bonn in Germany, supported by the German Academic Exchange Service (DAAD). He believes that the sandwich-based PhD level training program provides students with essential foreign exposure and the chance to see how science is done elsewhere. The sandwich model also helps to break the isolation that many researchers in Ethiopia are facing. In addition, it has some positive effects in decreasing the migration of young and bright graduates from the country.

For the future, Professor Mammo visions that the group should reach such a capacity and strength to conduct cutting edge research and to train young Ethiopians to make meaningful impacts on the development and nation building efforts of the country.

ISP has supported the research group called Synthesis and Characterization of Conjugated Polymers for Solar Cells, Fuel Cells, and Sensors, at Department of Chemistry, Addis Ababa University (AAU), since 2002.