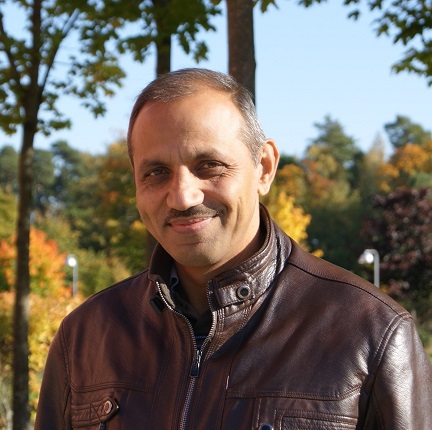 Dr Sharma’s interest in physics and lightning started in a traumatic way when he was only eight years old. His sister was indirectly struck by lightning close to their home outside Kathmandu and left unconscious for half an hour before she could be revived. An experience that got Sharma thinking about the physics behind lightning and how it works.

Today, Sharma has a PhD degree in the area, partly spent at Uppsala University. He is doing research on electromagnetic features of lightning, which is about understanding the physics and nature of lightning. Knowledge that is necessary to be able to prepare adequate lightning protection system.

Lightning is a serious problem in the tropic regions due to the damage it is causing humans and buildings. According to Dr Sharma more than hundred people are reported killed by lightning each year in Nepal. In order to protect people from being killed by lightning strikes Dr Sharma stresses the need for education and awareness creation, therefore he is conducting various awareness programs around Nepal. He also points to that there is a need to update the curriculum in schools, and that appropriate protective measures are implemented in houses.

- Lightning is a natural phenomenon that is not fully understood yet. With the increase of electronic gadgets, modern buildings and structures the threat of lightning is also increasing. To be able to understand and to mitigate the threats we should know how it is happening and what the nature and effect of lightning is. Lightning and global warming are also closely related and affecting each other. The increase in global temperature leads to more lightning and more lightning leads to an increase in temperature due to the production of greenhouse gases.

In the future Sharma wants to continue with his research in Nepal and also establish a research group in the area.

- In Nepal we don’t have lightning protection standards and no lightning groups. But the geography, topography and terrain of Nepal are very unique so it should be of much interest for scientists to start up something in Nepal.

Dr Sharma was a regional PhD student, meaning that even though ISP could not support research groups in his home country Nepal directly he received his PhD training through the ISP supported atmospheric physics and lightning group at University of Colombo in Sri Lanka.