A preparatory workshop for the coming mid-term evaluation meeting was held in Lund 11-12 November 2013. Participants were concerned students, supervisors and coordinators from Swedish Universities and representatives from ISP, Sida and Eduardo Mondlane University, Mozambique. ISP is coordinating the bilateral research program on the Swedish side.

The East African School on Applicable Algebraic Geometry was held 6-28 July, 2013, at Bandari College Mombasa, Kenya. The school had a total of 43 participants from Kenya, Uganda, Tanzania, Rwanda and Zambia. ISP sponsored the school trough the mathematical network EAUMP.

Our colleague Carl Söderlind passed away on 10th April, 2013. Carl was born 6th April, 1954 in Härnösand, Sweden. Our thoughts goes to his wife, Liza, their sons Alvin and Marcos, and to his former wife, Sonja, their daughter, Johanna, and son, Daniel.

Carl had been working at ISP since 2011, mainly with administrative duties within the bilateral programme at Eduardo Mondlane University in Mozambique. The picture to the left was taken during the Annual Review Meeting in Maputo in May 2012.

Carl's experience from working with developing countries, as well as post-conflict countries, goes far beyond that. Starting from 1986 up to 1989, he was serving as Post Exchange (PX-) manager during three different periods in the United Nations Interim Force in Lebanon (UNIFIL), and in 1996 as PX-manager in the NATO Implementation Force (IFOR) in Bosnien-Hercegovina. Carl also served for more than a year (2000-2001) as Programme Manager for Save the Children in Jerusalem, Palestine, as Project Coordinator at the Life and Peace Institute in Nairobi, Kenya (2005), and as Programme Coordinator for AIDA, Oxfam GB in Jerusalem (2005-2006).

We have lost a valued colleague and good friend. Rest in Peace, Carl. 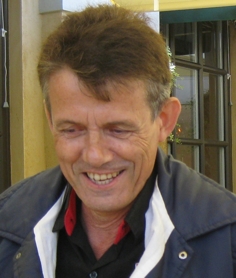 Cambodia awards the Royal Order of Sahametrei to chemist Lars Lundmark, Umeå University and also to Michael Strandell, Stockholm University. Lars and Michael are collaborating with the chemistry program at ISP.

On 10-11 Sept 2012, ISP co-organized a workshop on "Building a future energy system in Africa – How can science academies contribute?" in collaboration with the Swedish Royal Academy of Sciences and Swedish Secretariat for Environmental Earth System Sciences.

The mathematical network EAUMP celebrated its 10th Anniversary 22 - 25 August, 2012 through a school on combinatorial commutative algebra and a second conference in mathematics held in Arusha, Tanzania. the conference was sponsored by the Abdus Salam
International Centre for Theoretical Physics (ICTP) and ISP. Goals of the school and conference were:

A one-day seminar called "Experiences and Way Forward"was held to celebrate the 50th Anniversary of International Science Programme, at Uppsala University, 26 September 2011. The seminar aimed to highlight experiences drawn in the past 50 years from different perspectives, and to indicate the way forward. Invited speakers, as well as invited guest, were ISP collaborators from all over the world: