On the 25 October, the Makerere University main hall was filled with about 300 undergraduate students participating in the second workshop on “Gender Equality in the Basic Sciences – Bridging the Gap”. The workshop was organized by ISP Gender Equality Grant winner, Dr Betty Nannyonga, and is part of her project aiming to strengthen and support the success and retention of women in basic sciences at the university.

Female senior researchers in mathematics and physics from Stockholm University (Prof. Lovisa Sumpter) and University of Nairobi (Dr Alix Dehayem) gave lectures on the reasons behind, and problems with, the low number of women in science, and Makerere University staff and students shared their experiences on the issues. Ugandan TV and radio was present to cover the event.

“I am very satisfied with the well-attended workshop! The media coverage is good, it creates awareness of issues facing women in academia at our university”, said organizer Dr Nannyonga (picture below). 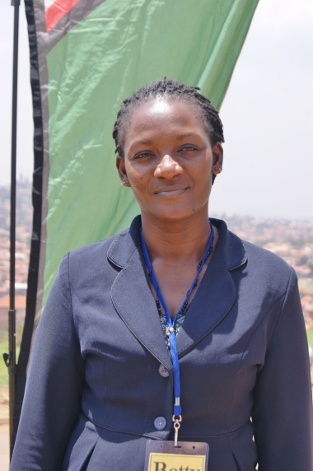 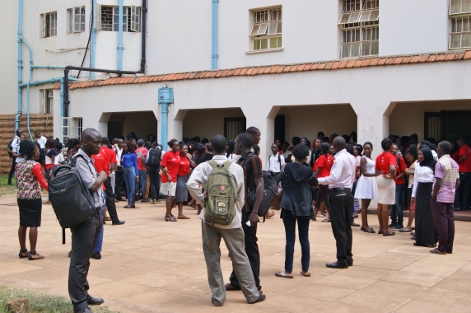 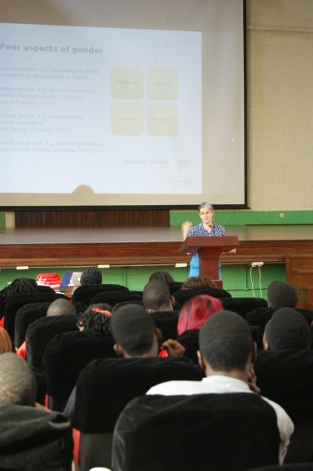 On 21 October, Sida and ISP jointly organized a seminar called "Building Future Networks" at the Sida Headquarters in Stockholm, Sweden, gathering about 80 students and postdocs from Sida bilateral programs and ISP supported groups and networks.

The aim was to provide the students and postdocs with better information and inspiration, and give the opportunity to expand their networks with like-minded people across the globe.

The seminar covered both practical information and tips from Kammarkollegiet, the Swedish Migration Agency and the Swedish institute, as well as presentations and discussions on gender equality in academia and cross cultural partnerships. The latter ones were held by Minna Salminen Karlsson, Docent at the Centre for Gender Research, Uppsala University, and Cecilia Öman, Deputy Chemistry Director at ISP. 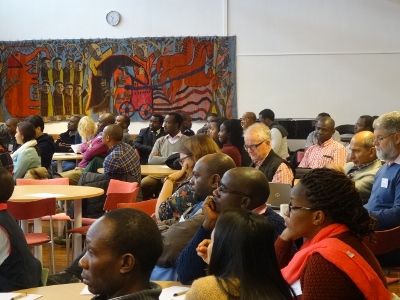 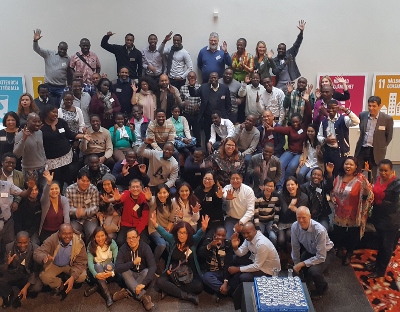 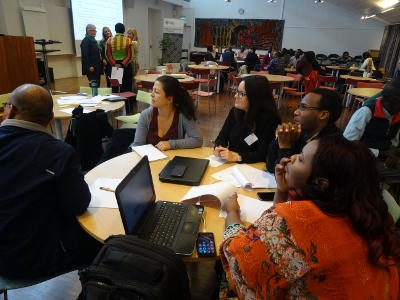 MSc students Ida Essner and Sara Hesse from the Sociotechnical Systems Engineering Program at Uppsala University carried out their Minor Field Studies at University of Nairobi, Kenya. They did a local context analysis of ISP-supported departments at the Institution of Nuclear Science and Technology (INST) and the Department of Physics at the university, looking at the obstacles women in science face when pursuing higher educations, hoping to answer why there are fewer women than men in technical higher educations, MSc level and up.

Their main conclusion is that one factor hindering women from pursuing science and technology education is cultural expectations. Science is considered to be a masculine subject reserved for men, something that appear to emerge in the attitudes of boys and girls at an early age. They also concluded that early childbirth commonly hinder women from continuing to higher levels in academia, because they often have the dual work load and responsibility of family and household. The cultural norms and expectations of the Kenyan women also favors marriage and family before self-fulfillment and own interests such as higher education.

Interview with Ida and Sara 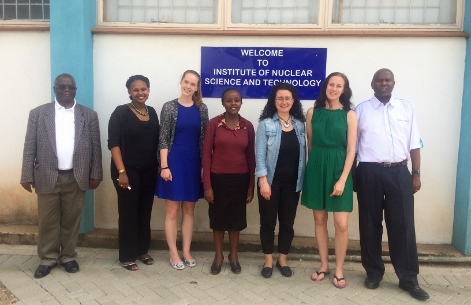 ISP’s contribution to the SDG's

ISP’s overall goal is to contribute to the strengthening of scientific research and postgraduate education within the basic sciences, and to promote their use to address development challenges. Our supported research groups and networks are contributing in several ways to the achievement of the United Nations Sustainable Development Goals (SDGs), with their research and competence.

A short information material is now available, giving examples of how ISP supported research groups and networks are addressing local challenges and thereby contributing to the SDGs.

ISP and the SDGs 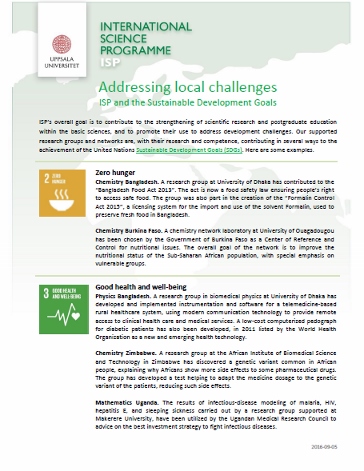 Between 15 and 26 August five female scientists from ISP supported groups in Kenya and Uganda visited Uppsala University to take part in the gender summer school named "Diversity in the Cultures of Physics". The school has been jointly organized and by the Department of Physics and ISP at Uppsala University, and the Department of Physics at Freie Universität Berlin, Germany. The main goal of the summer school was to promote mentorship and networking between young and senior (female) scientists, to improve non-academic competences and increase awareness about the gender biases present at universities and in academia in general.

In total the school involved 21 participants from Germany, Kenya, Sweden and Uganda. The two week intense program at Uppsala University included several lectures and workshops, with scientific, communication and gender equality contents. The participants also visited research groups in Stockholm and Uppsala. ISP acknowledges the Vice Chancellor and “Rådet för Lika villkor” at Uppsala University for the grant which allows the successful organization of the summer school. 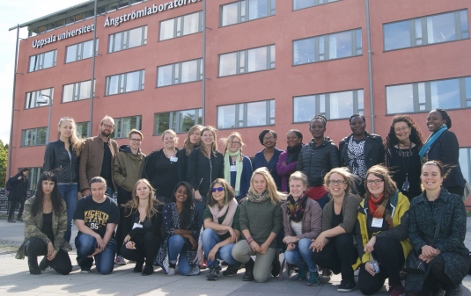 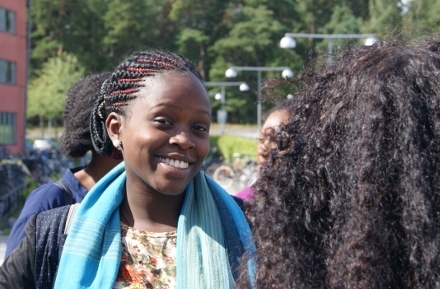 Participant Priscilla Muheki, is one of the first two female PhD students at the Department of Physics at Mbarara University of Science and Technology in Uganda.

According to you, what are the main issues facing women in Sciences in Uganda?

- Basically, it is about lack of opportunities for women. Because of cultural reasons, women have the main responsibility to take care of the home and the family which often are stopping them from pursing their studies and careers. If you are a woman, it is more important for your family that you get married than continue to study.  And once you get married and have kids, continuing studies is even harder because of the dual work load. In addition, the tuition fees are high and there are a limited number of scholarships. There is also a lack of female mentors and role models in science, especially at the tertiary levels. We are the first two female PhD students in physics at our university, and in general there are very few female doctors in physics in the country.

What do you take with you back home from the two weeks in Uppsala?

- It was good and empowering for me as a woman. I learned so much from the different talks. The main thing I take with me is “If you can imagine it, you can make it. If you can dream it, you can achieve it”. It summarizes my experience in every way. Back home we still have a lot of work to do to encouraging more female students into doing physics. I believe that I also need to include more men in this work, because their efforts are very crucial in promoting this cause. In any case “two hands are better than one”.

Former vice president of Tanzania joins the isp board

ISP warmly welcomes Dr Mohamed Gharib Bilal, Chancellor of The Nelson Mandela African Institution of Science and Technology, as a member of the ISP Board. Nuclear physicist Dr Bilal was Vice President of Tanzania between 2010 and 2015 and Prime Minister of Zanzibar from 1995 to 2000. In addition, he served as Permanent Secretary of the Tanzanian Ministry of Science, Technology and Higher Education in the beginning of the 1990’s. From April 2016 and onwards his broad and long experience will come to use at ISP’s Board meetings. 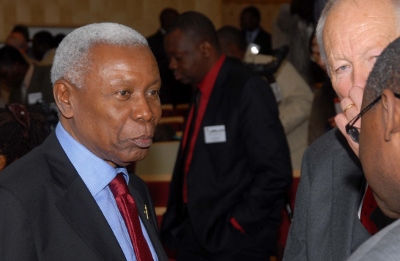 Why did you choose to join the ISP board and what are your thoughts about ISP?

What do you believe to be the greatest challenges in supporting higher education and research in developing countries? How can we overcome them?

- The major challenges are how to build a critical mass of research scientists and how to get meaningful financial support. The best way to overcome these challenges are to a) unwavering commitment of developing countries to support higher education and scientific research and b) long term partnership and mentoring from established research groups. I have always wondered if such program could be expanded to include more institutions in other countries also.

Thank you and welcome! 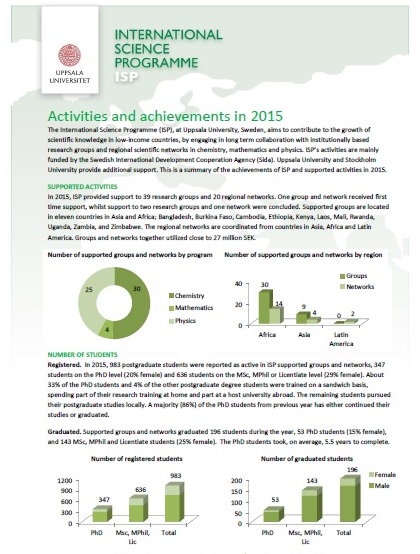 Former ISP colleague Marta Zdravkovic in collaboration with Eren Zink and ISP alumni Linley Chiwona-Karltun today published a paper on the “Experiences and perceptions of South–South and North–South scientific collaboration of mathematicians, physicists and chemists from five southern African universities” in Scientometrics.

The study covers experiences from ISP supported departments in Zambia, Zimbabwe, Malawi and Botswana and aimed to document and analyze the level of scientific productivity, collaboration patterns, scientists’ experiences and attitudes towards South–South and South–North collaboration.

A brief report tracing PhD graduates from ISP supported groups and networks 2008-2013, show that a great majority (92%) of the PhD graduates remain in their home countries and regions after graduation, most employed at universities and research institutes. 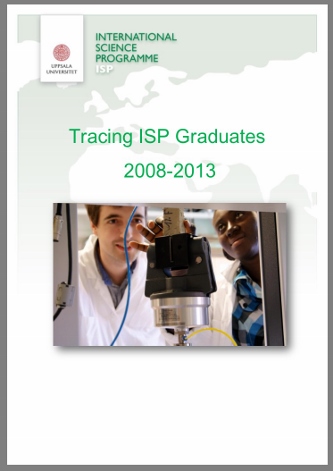 Last fall, ISP announced two grants for activities targeting the underrepresentation of women in science education and research in supported groups and networks. In all, 18 high quality applications were received, making the final selection very difficult. ISP can now inform that Dr Betty Nannyonga, Makerere University and Dr Edward Jurua, Mbarara University, both in Uganda, have been awarded the 2015 Gender Equality Activity Grants.

ISP warmly congratulates and looks forward to the collaboration between Makerere and Mbarara University. The two projects include similar and complementary activities, targeting many of the crucial barriers for female students and staff members to continue their studies and/or establish a research career in science. The activities are designed and will be running in close collaboration with local gender researchers.

We warmly congratulate ISP collaborator, Prof. Wandera Ogana, University of Nairobi, to the appointment as President of the Commission for Developing Countries (CDC). CDC is a commission of  the International Mathematical Union (IMU) working to "promote mathematics in developing and economically disadvantaged countries and to foster International collaboration". Prof. Ogana is the first African to hold this position.

The ISP supported network Eastern Africa Universities Mathematics Programme (EAUMP) is organizing its third conference under the theme “Advances in mathematics and its applications”, to be held at Makerere University, Kampala, Uganda 26-28 October, 2016.

The conference aims to celebrate the achievements of the EAUMP, to evaluate the EAUMP Network and the ISP collaboration, to stimulate regional and international collaboration in training, research and outreach, as well as to provide a forum for interaction of mathematicians from within and outside Africa. The Conference will be attended by approximately 120 mathematicians from Africa, Europe, Asia, Australia and United States of America.