ISP Report on phased out activities

ISP has followed up on the 57 groups and networks phased out of ISP support between 2003 and 2014. The aim was to find out if they are continuing their activities and how they experienced the ISP support and the phase out period.

The report shows that a large majority (82%) of the phased out groups and networks are still active. Many have been able to secure grants from both international and national funding agencies, and have continued to publish papers and graduate postgraduate students after ISP's support ended.

Most groups and networks were satisfied with the phase out period given (ranging between 1-6 years) and were ok with the reasons given for ending support. However, some improvements were suggested, including better communication from ISP's side, provision of proposal writing and research grant management courses, and better utilization of the capacity in phased out groups and networks. 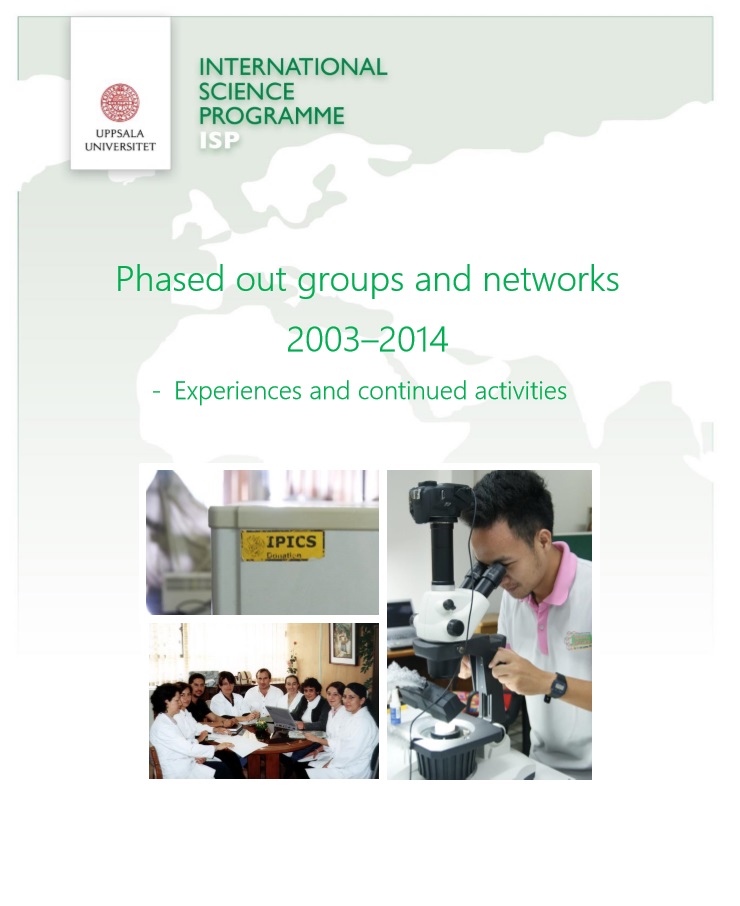 ISP's annual Board Meeting was held at the Biomedical Center at Uppsala University. ISP warmly welcomed two new members to the Board: Ambassador (ret.) Hans Corell and PhD student Agne Ciuciulkaite. A special thanks was also directed to resigning members Mohamed H.A. Hassan and Elzbieta Glaser.

Why and how should we communicate research results? That was the theme of the annual 'Building Future Networks' seminar jointly organized by Sida and ISP at the Sida headquarters in Stockholm. In total, 80 sandwich PhD students and postdocs from both ISP and Sida programs attended the event.

Representatives from the Nordic Africa Institute, Wikipedia and Gapminder gave lectures and workshops on how to pitch research results, how to use Wikipedia for scientific outreach, and on global misconceptions. The day ended with a student poster session and mingle bingo! 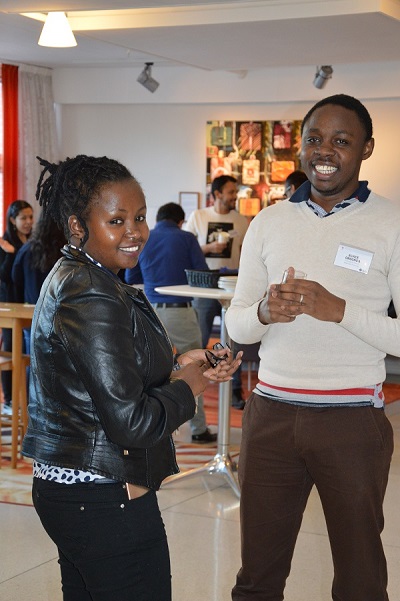 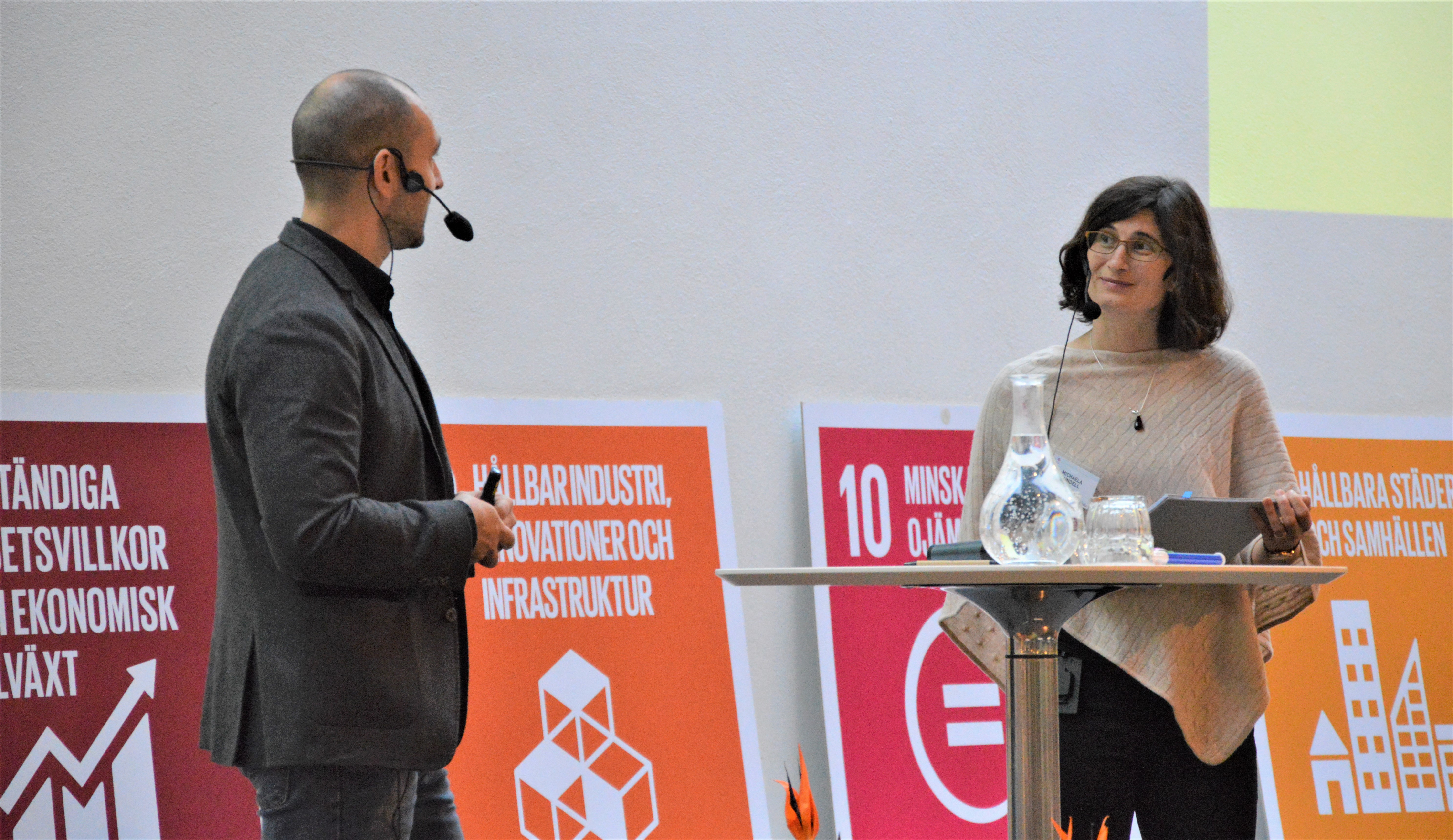 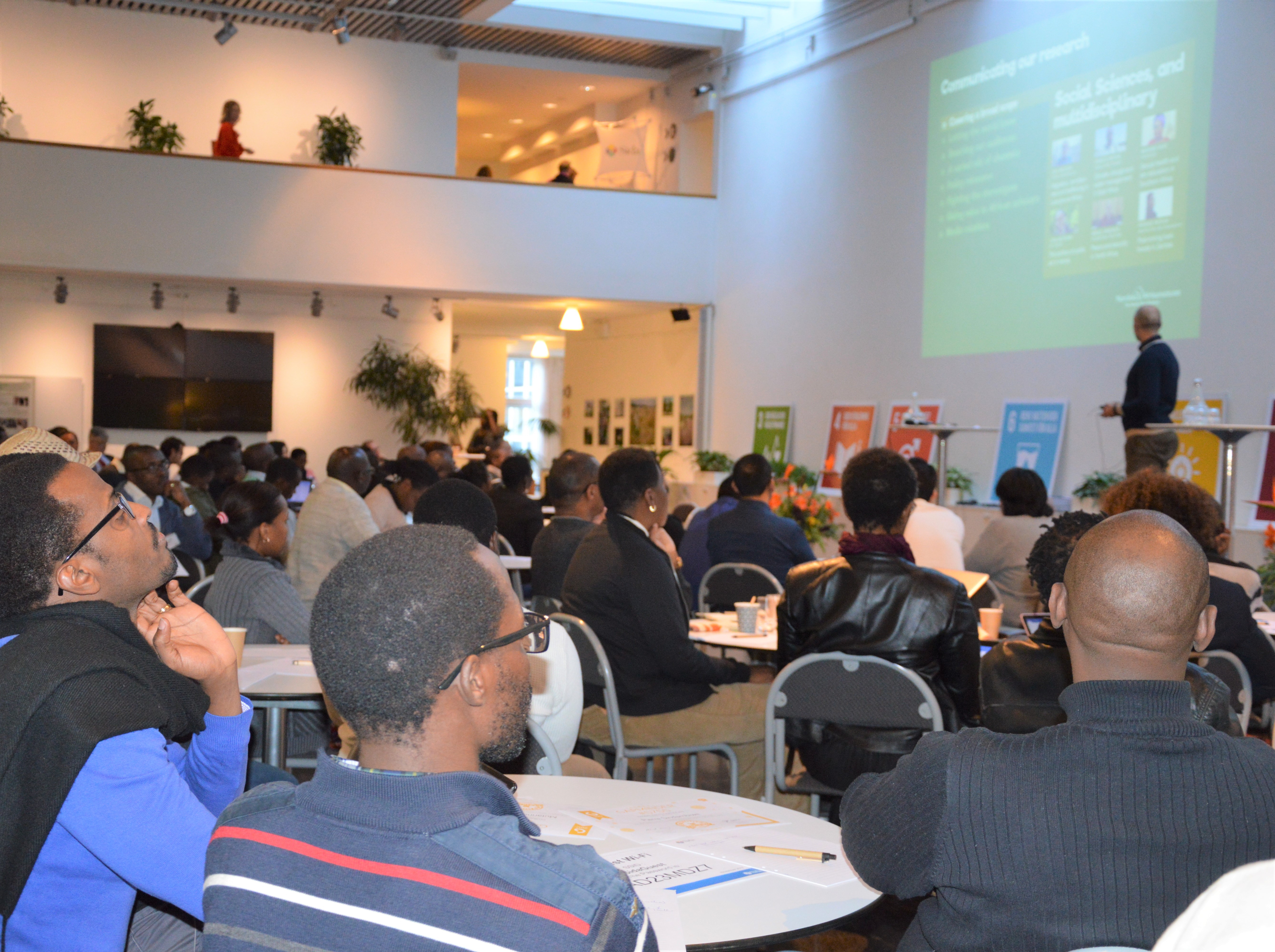 Archana has a bachelor’s degree in commerce and a master’s in business administration from University of Gävle, Sweden. While studying, she worked as a substitute teacher in middle schools in Uppsala, and in 2015, she did an internship at ISP. Archana will be responsible for paying allowances to Sida bilateral students from Bolivia, Ethiopia, Rwanda and Tanzania. In addition, she will administrate the Tanzania bilateral program.

- I look forward to working in an international environment at the university level. I hope to get a chance to develop myself as administrator, as well as to meet different people and get exposed to new cultures and languages etc.

Contact: archana.ganganaboina@isp.uu.se
*Archana is substituting for Aksana Mushkavets - any questions previously directed to Aksana should now be sent to Archana.

- I’m excited to move from the university administration to a more operational institution, and get closer to reality. It is bonus that I find ISP’s operations very important and valuable. I look forward to work with my new colleagues!

ISP in Sri Lanka and Thailand

A review of ISP´s former long-term engagement with research groups at universities in Sri Lanka and Thailand is now available!

The book includes a historical overview, developments and effects of over 30 years of research cooperation. The experiences and present whereabouts of former PhD students and collaborators are also covered. 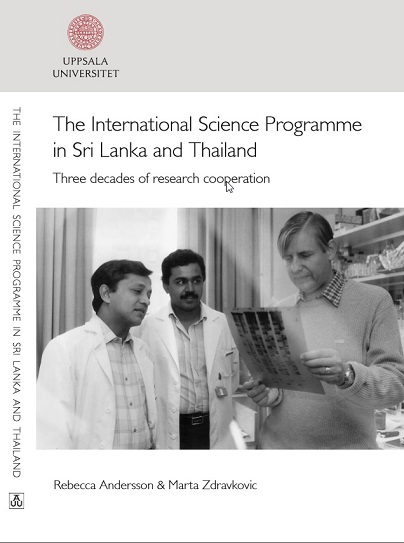 Our annual report 2016 is now available in full length and in summary! 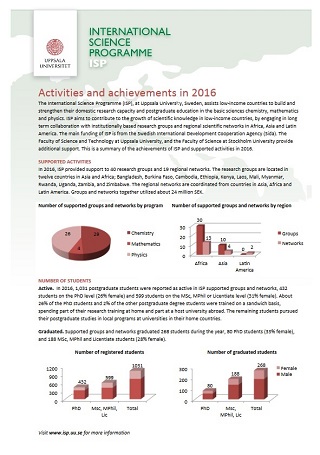 ISP warmly welcomes Ambassador (ret.) Hans Corell as a member of the ISP Board!

Hans Corell is an Uppsala Alumni with a long experience of working for the United Nations as Under-Secretary General for Legal Affairs and the Legal Counsel between 1994 and 2004. Before that, he served as Ambassador and Under-Secretary for Legal and Consular Affairs at the Swedish Ministry for Foreign Affairs between 1984 and 1994.

He has been a member of Sweden’s delegation to the United Nations General Assembly and has had several assignments related to the Council of Europe, OECD and the CSCE (now OSCE). Besides serving as a member of the Advisory Board of the International Center for Ethics, Justice and Public Life at Brandeis University and Chairman of the Board of Trustees of the Raoul Wallenberg Institute of Human Rights and Humanitarian Law, he has also been Legal Adviser to the Panel of Eminent African Personalities, chaired by Kofi Annan.

ISP warmly welcomes Professor Jenny Ruales from the Department of Food Science and Biotechnology at Escuela Politécnica Nacional, Ecuador, as a member of the IPICS Scientific Reference Group.

Prof Ruales has a PhD in food engineering from Lund University, and her research focuses on functional foods. Product development, food science research and project management falls within her area of expertise.

She has previous experience of working with ISP as a group leader of the ISP supported research group in nutritional biochemistry and biotechnology between 1984 and 2007, and as coordinator of the Latin American Network for Food Research (LANFOOD), supported by ISP between 1994 and 2007. In addition, she has performed consultancy services for the Word Bank Ecuadorian Children Feeding Program, and coordinated the MSc and PhD program in food science at Escuela Politécnica Nacional since 1994. 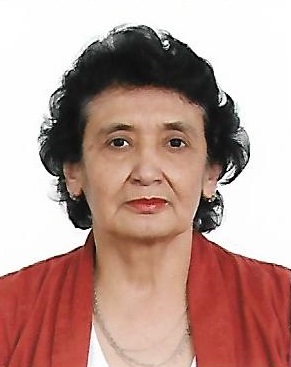 ISP has supported the Eastern Africa Universities Mathematics Programme (EAUMP) since its inception in 2002. In 2016, ISP commissioned an evaluation of the network to assess its activities and progress, and to provide EAUMP and ISP with an independent review of future directions.

In summary the Evaluation Team concluded that: "the EAUMP network has played an absolutely essential and transformative role, at a reasonable and proportionate cost, in building mathematics research and teaching capacity throughout the Eastern African region, introducing new areas of mathematics and strengthening existing ones. There are signs of consolidating and emerging research groups, regular activities becoming embedded and finding additional support, as well as new types of activity. The continuing support, in a suitable form and shape, and taking into account the recommendations below, of mathematics, the most fundamental of enabling sciences, in the East African region is a worthwhile endeavour fully in accordance with the aims and objectives of ISP and its main funder Sida." 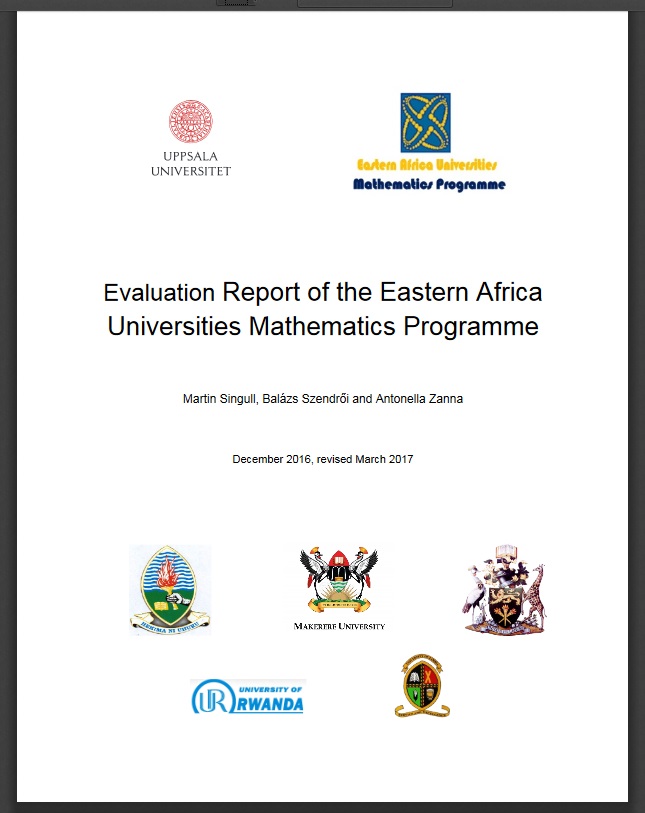 The prestigious journal Nature highlights the work on precision medicine made by the ISP supported research group at the African Institute of Biomedical Science and Technology (AiBST), headed by Collen Masimirembwa. 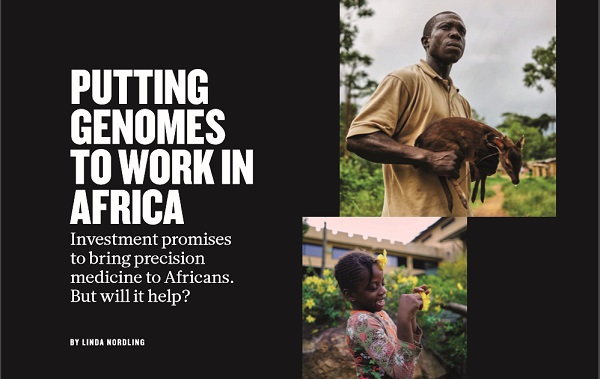 AiBST research has gained attention following a public health scandal in Zimbabwe, where many HIV patients in public health programs stopped using the drug efavirenz due to heavy side effects. Masimirembwa’s research group has shown that a gene variant carried by many Zimbabweans slows their ability to break down efavirenz, thereby causing side effects such as hallucinations, depression and suicidal tendencies for those carrying the variant. These side effects can be reduced by precision medicine – where the diagnostic and treatment is tailored according to the needs and genes of individual patients.

As a result of the Nature article, HIV patients and relatives of patients experiencing the challenges of using efavirenz-based drugs are contacting AiBST for assistance.

The African Academy of Sciences (AAS) and the NEPAD Agency’s Alliance for Accelerating Excellence in Science in Africa (AESA) has been granted US$2 million from the Carnegie Corporation of New York for a postdoctoral fellowship program. The initiative responds to an urgent need to increase the number of researchers in Africa.

ISP will serve as a partner in the program, together with six other African, European and US higher education institutions. The program and its partners will work together to: 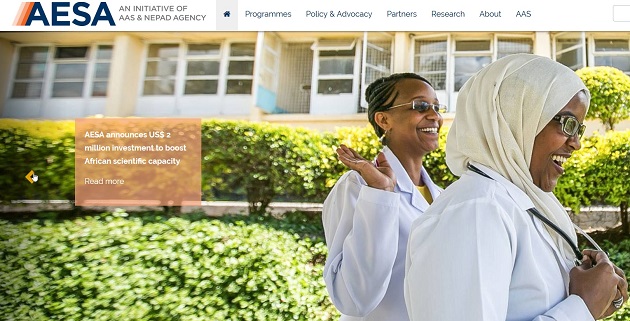 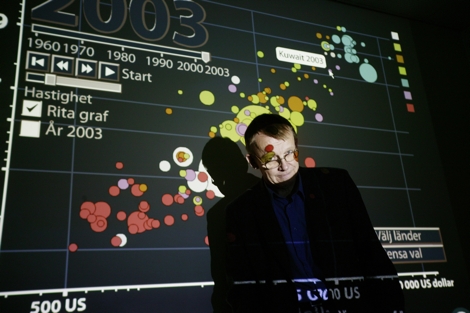 Hans Rosling was a deeply appreciated tutor, student supervisor, and scientific cooperation partner particularly in the IPICS supported research network on cassava safety, which he coordinated 1993 to 2001.

In 2011, Hans Rosling contributed with his famous enthusiastic presentation approach to the 50th anniversary seminar of ISP, when he put the development and operational mode of the program in a proper, global perspective with his presentation “ISP and the World”.

We are immensely grateful for Hans Rosling’s past contributions to the program and for the time he has devoted to ISP.

Head of ISP and Director of the Chemistry Program (IPICS)